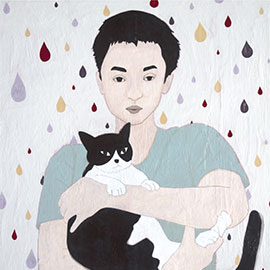 Kotatsu Iwata was born in Osaka, Japan and currently lives in New York. Iwata’s oeuvre is best appreciated in his solo exhibitions. These have been held in several major and respected institutions in the United States and internationally, including The Place 229 in New York and the Tezukayama Gallery in Osaka, Japan, NY Coo Gallery, New York as well as at the ISE Cultural Foundation in New York, which is regarded as the premier venue for the exhibition of Japanese art in New York.

Iwata is influenced by Pop Artists such as Roy Lichtenstein and Andy Warhol whose works reflected the social situation of 50’s and 60’s. In step with his influences, Iwata incorporates what he considers the significant essence of our current age, the diversification in the perception of the world. He explains that in this contemporary time, amongst so many simultaneous occurrences, people’s attentions and interpretations depend on how individuals may try to bring meaning to their lives.

Iwata has developed a unique approach to the venerable medium of painting, use a thick application of acrylics that juxtaposes darker, subdued tones with bright, energetic colors. His paint application also lends a strong textural quality to his works, one that in exhibitions lends a three-dimensional aspect to his work.

Iwata places the antithetical organic and inorganic expressions to coexist in the other works in his show as well. While portraying objects from daily life in an exercise of objectivity, diverse interpretation that parts ways from the artist’s intent becomes possible.

The distinct aesthetic qualities and unique creative vision evident in Mr. Iwata’s work has earned his critical acclaim as well as a broad audience. This acclaim is reflected in the numerous awards his work has garnered. These include both the Spirit Award and the NYCoo Prize from the NYCoo Gallery in New York. Both are juried awards, and both are awarded based on the artistic accomplishment of the works themselves as well as the professional accomplishments of the artist.